We have published a new page on the school website – Internet Safety (on the Parents’ pull down menu) – a page full of useful information, tips, videos and websites on how to keep your family safe online.  Please take a look – we hope that this will be the start of a useful community network where we, as stakeholders in the children’s future online safety, can share ideas and, together, teach our children how to stay safe in the digital world.

At school, all the classes have been taking part in a survey – Appsolutely Fantastic – which aims to find out exactly which games and apps Nutfield Church children like to play.  The results from the survey will be available at the Internet Safety Drop In Sessions on Tuesday 6th February.  There will be a lot more on offer and we urge you to come if you can:

There are two sessions and you can drop in for a quick visit or stay as long as you like.  The first is during the afternoon – 2.30pm-5pm – when you are very welcome to bring your children along with you, either your toddlers before you pick up the older children, or the whole family following school and club pick up times.  We are holding a second, evening session – 7pm-8pm – where you can come along, find out the latest in online safety, and enjoy a glass of wine and some nibbles in a more relaxed atmosphere.

On Friday 10th November, the Nutfield Church Year 6 Sports Leaders had a great morning at St Bede’s School, finding out how to teach games and sports to other children.  They learned lots of different skills and decided that probably the most important skill of all needed for a Sports Leader is teamwork.

During the training, they had lots of chances to practise their teamwork, especially when making up a new game to teach to the Sports Leaders who were there from other schools. The children also learnt about the Spirit of the Game Values – determination, respect, honesty, teamwork, passion and self-belief – and they will be trying to include them in their leadership work and encouraging everybody else to do the same.

The Nutfield Church Sports Leaders left the training with a challenge from the organisers – Active Surrey – to plan and run a sports event in school before the end of term.  With the support of Miss Woods and the teachers, they are organising a Run XC event on the afternoon of Friday 15th December, when all the children at school from Reception to Year 6 will take part in a fun Christmas themed cross-country activity. 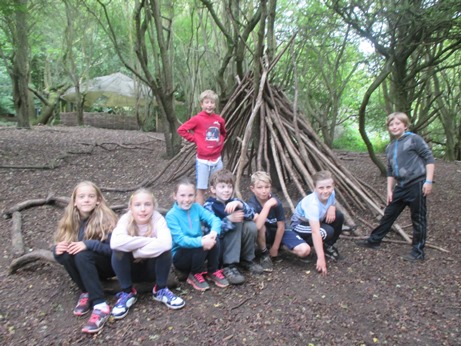 Year 6 have had a fun packed day trying out some Woodland Skills – bug hunting, shelter building and fire making.  Favourite part of the day?  Toasting marshmallows and painting faces! 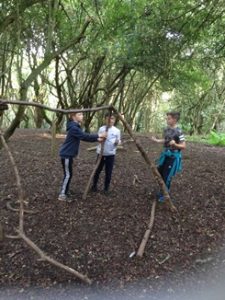 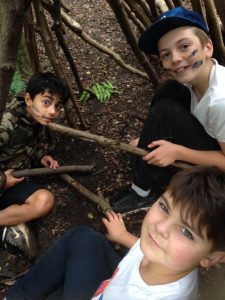 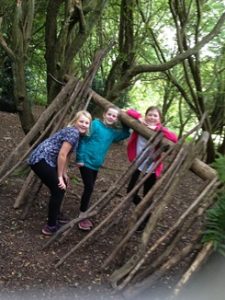 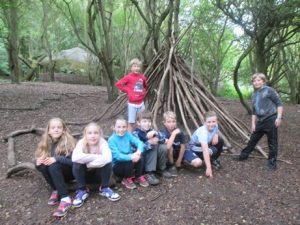 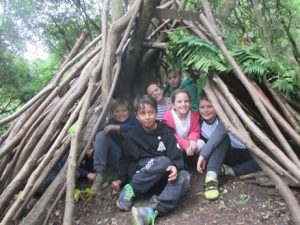 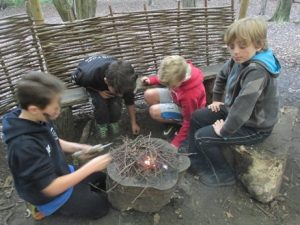 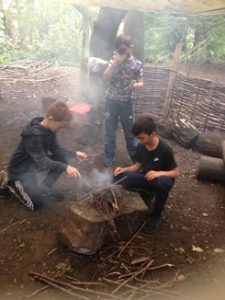 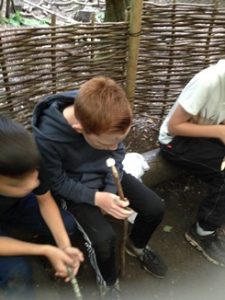 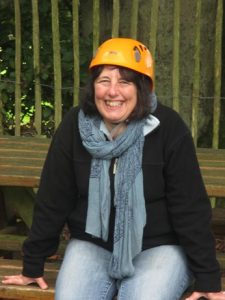 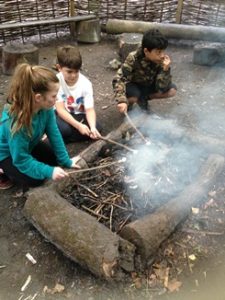 The teachers are having a lovely time too – look at the smiles on Mrs Cox and Mr Green’s faces! 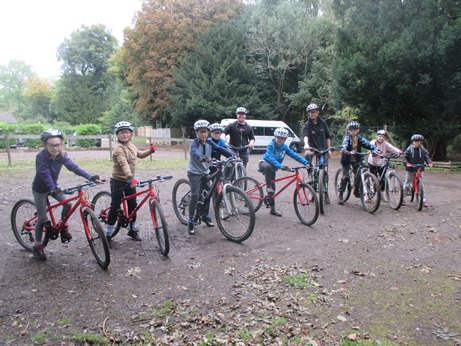 Today at High Ashurst we all took part in different activities. Our group started with Mountain Biking and we all loved riding through the dirt and the best bit was going off site away from the Centre. 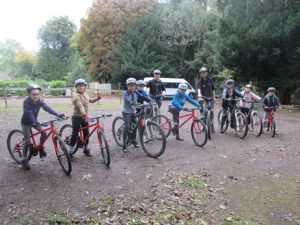 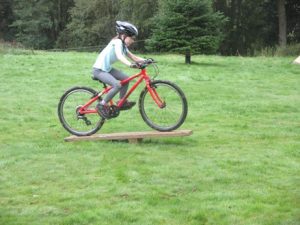 Later that day, we did Climbing and Abseiling at the Climbing Tower.  It was quite scary when we abseiled from the top but fun at the same time.  Our team all worked together when we were pulling the ropes to make the harness tight so that the climber wouldn’t fall.  Some people reached the top. “We felt very pleased with ourselves,” said Dilan and Zach. 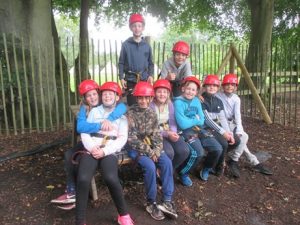 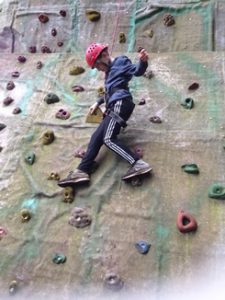 Despite the fact that he had a broken  elbow, Harry still managed to absail down the tower – he did it backwards.

One of the other groups had a try at Archery.  Max won the Archery contest with 68 points.  His prize was to wear the Robin Hood Hat of Greatness!  “We played a game called ‘Save the Royal Family’ where we had to hit every colour on the target in order – white, black, blue, red and yellow – from the outside to the inside of the target.  We saved three members of the Royal Family – the Queen, the Prince and the Princess,” said Max. 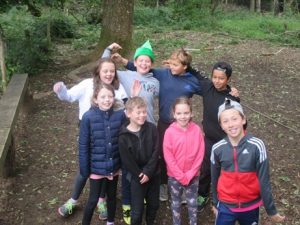 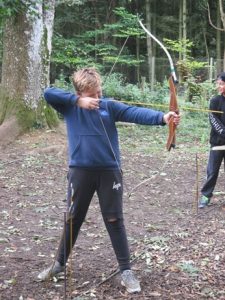 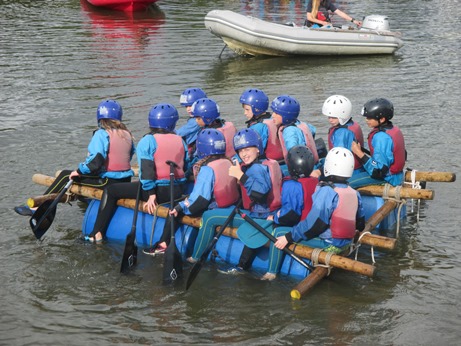 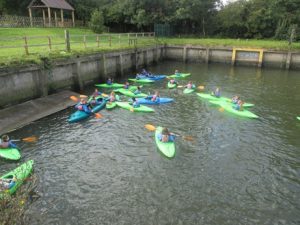 On the day of our arrival we stayed in many tepees in Buffalo Creek. They were named Sitting Bull, Pocahontas, Sacajawea, Geronimo, Black Hawk, Crazy Horse and Little Big Horn, the main tent.

We asked everybody what they enjoyed most about the day, and Josh, Edward and Honey said sleeping in the tepees was their favourite bit. As soon as we arrived we went kayaking and Josh and Zach capsized and Zach lost a shoe.  We all had fun and in the afternoon we went rafting. 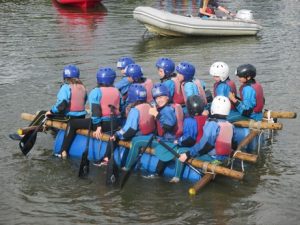 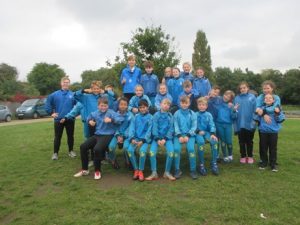 We were split into three teams and all made our own rafts. “Luckily we capsized!” said Isaac and Robin.  Lucy Eddington said that she enjoyed it too. “It was a very good experience,” she said.

That night we played a spotlight game in the dark and Amelie and Robin won.  Everyone in Year 6 went looking for yellow post it note clues that were hidden around the site and Isaac, Oli and Lottie completed the challenge to make 6 groups of eight clues. 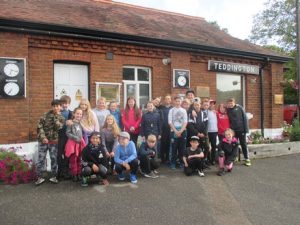 he next morning we walked to Teddington Lock before we packed up and the minibus drove us to High Ashurst. Are we having fun so far?  Paige says, “Yes, we are!”

Staff at school had a fantastic INSET day training on Friday. As part of the new PE curriculum, an extra strand of learning has been added – Outdoor Adventurous Activities.

Whilst, at Nutfield Church Primary School,  we have always been committed to getting children outside to learn in all their subjects, and have recently held a series of activities during Outdoor Learning Week, we have decided to extend our resources for such sessions.

Earlier in the year, Surrey Outdoor Learning and Development installed an orienteering course in the grounds, and yesterday, provided training for the staff using some new teaching resources which focus on problem solving, team building, bouldering (the climbing wall), journeying (forest skills), orienteering and environmental tasks, all accomplished outside.

The staff completed the day, full of enthusiasm and keen to share their new ideas with the children.

Year 6’s residential visit to Barton Hall is well underway.  Take a look at the photos on the year 6 page and see what we are getting up to.

The Nutfield Church Primary School Tag Rugby team competed in the Surrey County Finals last Wednesday and came 9th out of 26 schools there.

This is a remarkable achievement, especially in the light that we were the smallest school competing- all of the other primary schools at the event were larger than one class entry!

Over 200 primary schools entered the Stage 1 level of the tournament, back in January.  The Nutfield School team came second in their heats, held at Oxted School, only narrowly losing to St. Mary’s Primary School by one try in the last game.

Our team then went on to compete in a second round of heats at Warlingham Rugby Club in March.  They came second once again, to St. Mary’s.  Luckily, this meant an automatic entry into the county wide finals.

At the finals, in the first four games, where the points were tallied up to provide seeding information for the final four games, Nutfield was placed 8th, having won 2 games and lost 2 (can you believe it – we had to play St. Mary’s again!)

This meant we were playing with the seriously teams for the last part of the finals, and we encountered some stiff opposition from Pyrbright Primary, Cuddington Croft, St Francis Primary and, yes, you guessed it, St. Mary’s.  Although we lost these games, it was only by one or two tries, and we ended up 9th in the competition overall.

Our children played superbly well – they are true sportsmen and women – and they displayed all the best qualities of sport – teamwork, support, enjoyment and determination – throughout the day.

Well done to all of the children taking part, and many thanks to the teachers who accompanied them – Mr Smith, Mr Bowen and Mrs Fine – and finally a big thank you to all the parents who transported the children and supported them throughout the competition.